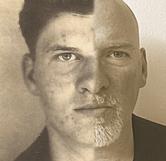 me and my father

Thomas J. Wingate, born in Paterson, New Jersey in 1932, was a troubled and angry man. I loved him dearly for the ten brief years I knew him, but I also spent that entire time in fear of him. I didn’t want him to have an outburst. I didn’t want him to come home drunk. I didn't want him to go to prison for attempted murder, which is what he probably would have done if he hadn’t died. My father's anger, frustration, and sense of failure shaped me, as did my fear of them, even long after he was dead. I’ve identified with him so fully that I've tried, in ways, to become just like him. I've also distanced myself completely from traits I felt I shared with him. I have shaped myself around both the memory of his presence and the memory of his absence. Neither memory is fully formed. Neither memory understands what the other understands. I've been writing about my father for as long as I’ve been writing. Nothing brings him back permanently, but daddylabyrinth is full of moments when he comes alive for me again— whether through old pictures, through my voice reading his stories, or through the small, everyday phrases and gestures I carry with me that once where his.

me as a father

Nothing in my life has been as challenging as fatherhood. My sons are not the problem—they are wonderful kids, full of curiosity. The problem is the baggage I carry from an incomplete and puzzling relationship with my own father, full of emotions I have never resolved. daddylabyrinth explores not only my relationship with my late father, but the way it has shaped my relationships with my sons and my identity as a father. Everything I do as a father feels like it exists in my own father’s shadow, and those unresolved emotions have at times turned me into the angry man I promised myself I would never be. Those are the dark days, the days when I feel like my father’s history is a curse I can never run away from.

Sometimes, though, I find a space in my life with my sons that helps me discover the positive aspects of my life with my father, which would all have remained buried if I hadn’t started digging my way through the past with this book. I spend a lot of time worrying about what negative aspects of my father’s personality I've passed on my sons (though they are less concerned than I am). And I know that this worry won't go away anytime soon, which is why daddylabyrinth is a book that will change and grow over time, as my own life as a father deepens.

Because I saw no clear way to tell these intricately entwined stories in a straight line, as I might in a traditional book, I turned to digital tools. I wrote daddylabyrinth on a software platform called Scalar originally developed by the University of Southern California’s Alliance for Networking Visual Culture. Scalar offered me a way to tell my story that mirrored the way it moves around in my imagination—hopping trains of thought, looping around itself, branching and re-branching, running into dead ends. Without this digital tool to probe my memory and imagination, I never would have uncovered so much within it. daddylabyrinth is a lyric essay in that it doesn’t try to settle on definitive meanings to experience, because my experience with fathers and fatherhood is too messy for that. In this book I focus on capturing impressions as they arise, hoping to re-create in readers the kind of emotional understanding that this book has helped me achieve for myself. It is designed for multiple unique journeys, rather than a beginning-to-end reading experience. Dig in, step out, dive back. Go where you haven’t been before.

photo credit
The photo mashup in the header (my father at nineteen and me at forty-nine) was designed by Kris Hedrick.
View on Mobile